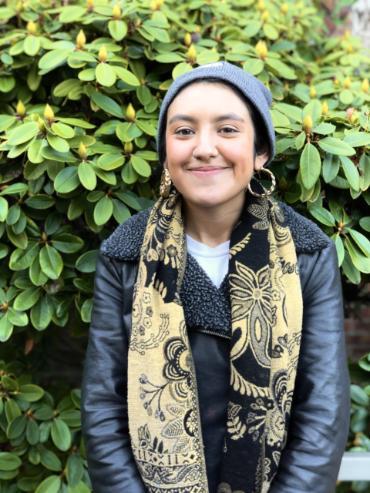 Tell me about your history in set design and how it led you to work on Misanthrope?

Even when I was a little kid I really had a passion for art specifically painting. Later, I also became obsessed with theater and  found a way to combine the two things by becoming a scene painter and set designer all throughout high school. Sophomore year at SeattleU I walked into the shop in the theater and asked if there were any positions open for scenic painting and luckily there was and I was brought on to the team. That same year I was in an intro to design class, and a more specific scenic design class and I totally fell in love with it and ever since then I have been trying to do as many scenic-oriented things as possible.

Have you ever done a modern interpretation set before?

Mother Courage was set in an ambiguous time period and the way SeattleU does their shows they usually don’t do them exactly in a time period so I have gotten to play a lot with anachronistic designs. Talking to the scenic designers about how they interpret a scene or image if it is not specific to a time period, it has been really interesting to see how their minds are free to wander around the history of inspiration as opposed to being tied to one time period.

What was your biggest challenge in taking on this production?

I am usually a painter but this quarter I switched to carpentry and was on the carpentry team for the first time. I had never done carpentry before ever and I was usually too scared to join in because there was such a sense of camaraderie on the carpentry team which I think is great but also made me nervous that I wouldn’t be able to fit into that, especially as a female designer. But luckily, everyone on the team was really welcoming, explained everything well, and were extremely hands-on and it ended up being a very empowering experience.

What has been you favorite moment as part of this production?

We have a new interim scene design professor this quarter, Pete Rush, who I had never worked with him before and it was really interesting to work with somebody new who I didn’t know as well. Figuring out where he comes from when he starts designing and how his process develops and how much it could differ from somebody else’s was a great learning experience.

Who should see this play?

Everybody should see this play! But really, I think SeattleU students, college students, even the Seattle Academy or high school kids should see this play. Younger people should see this play because it is such an old piece but the way that we are presenting it, especially through the set design, is so fresh and modern and I think it makes it really relatable and accessible for students to understand and enjoy the piece.

What are you future plans or productions coming up?

Next quarter, I am designing the set for the mainstage show, 45 Plays for 45 Presidents, directed by Jane Nichols and we are in the process of designing that right now which is very exciting and new. Everybody should see that play too!