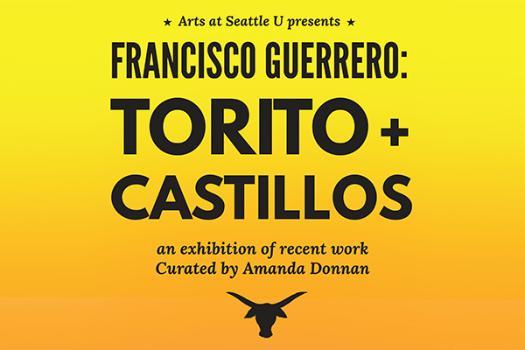 Torito + Castillos presents a body of sculptural and installation work SU associate professor Francisco Guerrero has developed over the last year, which provocatively conflates the aggressive posturing of the military industrial complex with the spectacle and machismo of traditional Mexican pyrotechnic displays. The concept grew out of Guerrero's interest in the DIY origins of military technologies, particularly Unmanned Aerial Vehicle platforms or drones. “The UAV was invented during World War I by an engineer named Elmer Ambrose Sperry,” he says. “It was basically a biplane packed with TNT whose operators aimed it from the ground and launched it toward its target using a huge catapult.” A century later, drone technologies like the MQ-1 Predator have become a major facet of military assault strategies— purportedly used only to carry out “targeted killings” but often striking civilians as well.

Guerrero translates these dynamics of aggression—and the drone’s homespun roots— through traditional Mexican forms associated with the celebration of New Year, Holy Week, and saints’ feast days. Since the 19th century, people in small towns across Mexico have marked these occasions by constructing castillos, or “castles”: spinning Catherine wheels mounted on wooden towers and strung with lighted rockets. The culmination of a town’s fireworks display is often the quema de toros, or the “burning of the bulls,” in which hundreds of boys and young men wheel handmade toritos— papier- mâché bulls stuffed with explosives—into the plaza and set them alight.