When Jasmine Waland, (BA, Sociology and Humanities for Teaching, minor in Psychology, ‘19) helped organize a social justice dialogue that was part of year-long teach-in series created by the (then) Anthropology, Sociology, and Social Work Department*, she did not anticipate that it would lead to co-publishing “Sharing Power, Building Community: Strategies for Improving Nutrition Education at Food Pantries,” a significant research project. 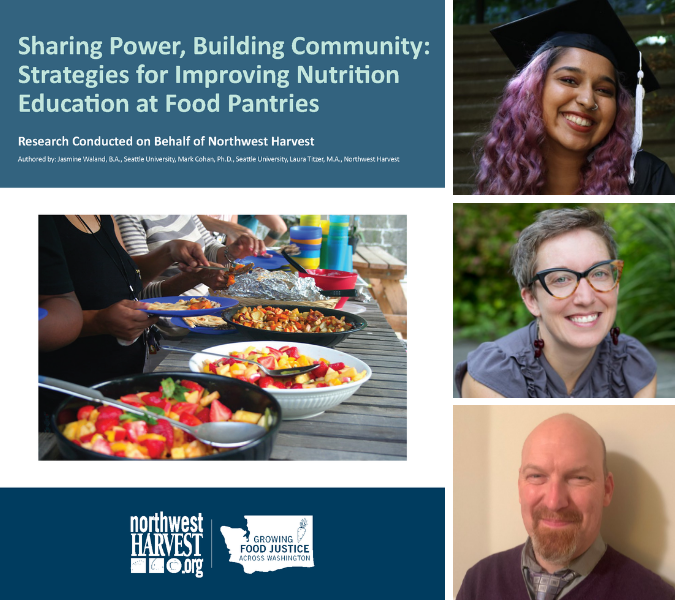 “Sharing Power, Building Community” is the result of a collaboration between Mark Cohan, PhD, Associate Professor and Chair of Seattle University’s Department of Anthropology and Sociology; Laura Titzer, Community Initiatives Manager, Northwest Harvest; and Waland. Based on interviews with food pantry customers and professionals working in the emergency food system, the report identifies how customers and professionals, each in their own way, believe that food pantries and the larger emergency food system (EFS) can be transformed to be a force for food justice.

Waland worked on the 2018 social justice dialogue, which was designed to examine food insecurity and how it comes about in communities. Students had the opportunity to engage in conversation with those who worked directly with people experiencing food insecurity. “I talked with Laura, in her role at Northwest Harvest,” said Jasmine. “I had so many questions, asking her, as a white fem in this work, how does race come into play, how she viewed the root causes of food insecurity, what role a non-profit plays in combatting food injustices, and so much more. I learned a lot from Laura and quickly recognized she’d done a lot to unpack her own privileges and how they impacted the work she did.”

Not long after the event, Cohan approached Waland about joining a research project about food insecurity, a collaboration with a community organization. She was surprised. “I was so new to the topic of food insecurity, so early in my own learning journey,” she said. “I had never thought about being a researcher. I immediately said yes.” It was then that she learned that Titzer would be the community partner for the project and felt that it had come full circle.

Cohan and Titzer had worked together on an earlier class project. “In that class, the students helped produce a video about food banks that Northwest Harvest used to promote an annual conference,” he says. “After that, Laura and I decided we wanted to continue to collaborate, she raised the issue of nutrition education at food banks, we started working on the design for a research project, and the rest is history.”

“Mark asked me to participate in a social justice event at SU and I happily accepted. I remember the students present being very engaged and one person who was very curious about the emergency food system and white saviorism,” says Titzer. “Her curiosity and social justice focus were a force to be reckoned with and I found myself happily engaged in conversation with her. I still remember talking about this student to my colleagues and partner because I was so impressed with the critical questions and conversation. Later, when Mark and I were planning out this research project, he said he already had in mind a student to join the project. It turned out to be Jasmine, the same woman I had that terrific conversation with. I felt that the project was aligning in just the right ways. “Working with the experience that Cohan brought and the passion and skills that Waland brought created a research team that went beyond the report and into friendship. Says Titzer, “I value the time I got to spend and learn from both. In my role I’ve worked with many student interns over a variety of projects, and this was by far the longest giving credit to Jasmine’s passion and values when she had so much going on in her accelerated life after college. The value that working with a university brought cannot be undermined and concretized the importance of having a diverse team such as ours each bringing our own unique lens to the work while each appreciating and holding space for what the other was bringing.”

During her senior year, trained in semi-structured interviewing by Mark, Jasmine conducted interviews with 10 food pantry customers and five Emergency Food System professionals (EFS). She started with some nervousness. “I remember my first one, with a man experiencing homelessness,” she recounts, “Afterwards, he thanked me so much for hearing his story and for seeing him, having felt so invisible to many. I left with a huge smile.”

“I aimed to practice empathy throughout each interview,’ she says. "As a woman of color working with primarily people of color experiencing food insecurity, I wanted the interviews to feel like a cathartic rather than a re-traumatizing experience. I walked into the interview room with a lot of caution and left with gratitude.”

After graduating, Jasmine went to India on a Fulbright scholarship, and continued working on the project during her trip, and after she returned home. “After that, I moved to Philadelphia and began teaching, and we finished writing the final report.”

The team talked about some of the key takeaways identified in the report. Mark said, “One for me is the importance of power-sharing, which requires seeing food pantry shoppers as people with knowledge and skills that are vital to improving the emergency food system.”

“One thing that stands out for me is food pantries should build partnerships with a holistic approach,” said Waland . “There is great opportunity for food pantries to create partnerships that provide other needed resources like access to vision, health and dental care.” She notes that one of the customers suggests that food pantries should make these connections “because right now the EFS ‘feeds the body, but not the mind.’ “

“For me, having worked in this sector now for almost a decade, the findings weren’t necessarily surprising as much as they were validating to my own values within food and social justice,” says Titzer. “So for me, the key takeaways of the report are power-sharing between food pantry and shopper – seeing the shopper as someone with knowledge and skills to offer, as someone with gifts to offer. The second takeaway is meeting people where they are, literally. In removing barriers to access food or classes, meeting people where they are physically, mentally, and emotionally goes a long way. I hope this report can reverberate out not just in Washington but across the country to help food pantries create more holistic experiences in partnership with their shoppers not for them.”

Reflecting on the experience, Waland shares thoughts for other students, “If I could give any piece of advice to Seattle U students doing research I would tell them to seek out research projects where they have the opportunity to build alongside community and uplift voices that may otherwise be unheard. From this experience, I honored people’s stories, listened to what changes they wanted to see, and then was able to tell those stories in a research paper distributed to food banks across the nation to help make that change. All research should reposition power from the interviewer to the interviewee.”

The summary report and the full report can be downloaded from Northwest Harvest.

This project is one example of how the Sociology program gives students a lens through which to understand social practices in their families, institutions, and social policy. The program prepares them to engage in critical analyses of institutional power and practices, and to transform individual and group consciousness with an orientation to social action. With a strong emphasis on applied learning -- community-engagement, internships, social movements -- the program offers students a toolkit of theories and skills to build a more just world.

*Social Work is now a single department. Anthropology and Sociology continue as a joint department, representing both programs.