The Sanctuary Print Shop bridges art and community: it is both a functioning print shop and an open space for engaging questions about immigrant rights. Visitors are invited to not simply take in the exhibition– comprised of prints, timelines and videos about sanctuary cities and immigration ordinances in the US– but to directly participate in silkscreen workshops and printmaking events, community conversations, and other public interventions held over the course of five months. In the tradition of printmaking for social justice, Sanctuary Print Shop: Seattle uses art and design as catalysts for shaping the future. All are welcome here.

Hours and location information can be found here. 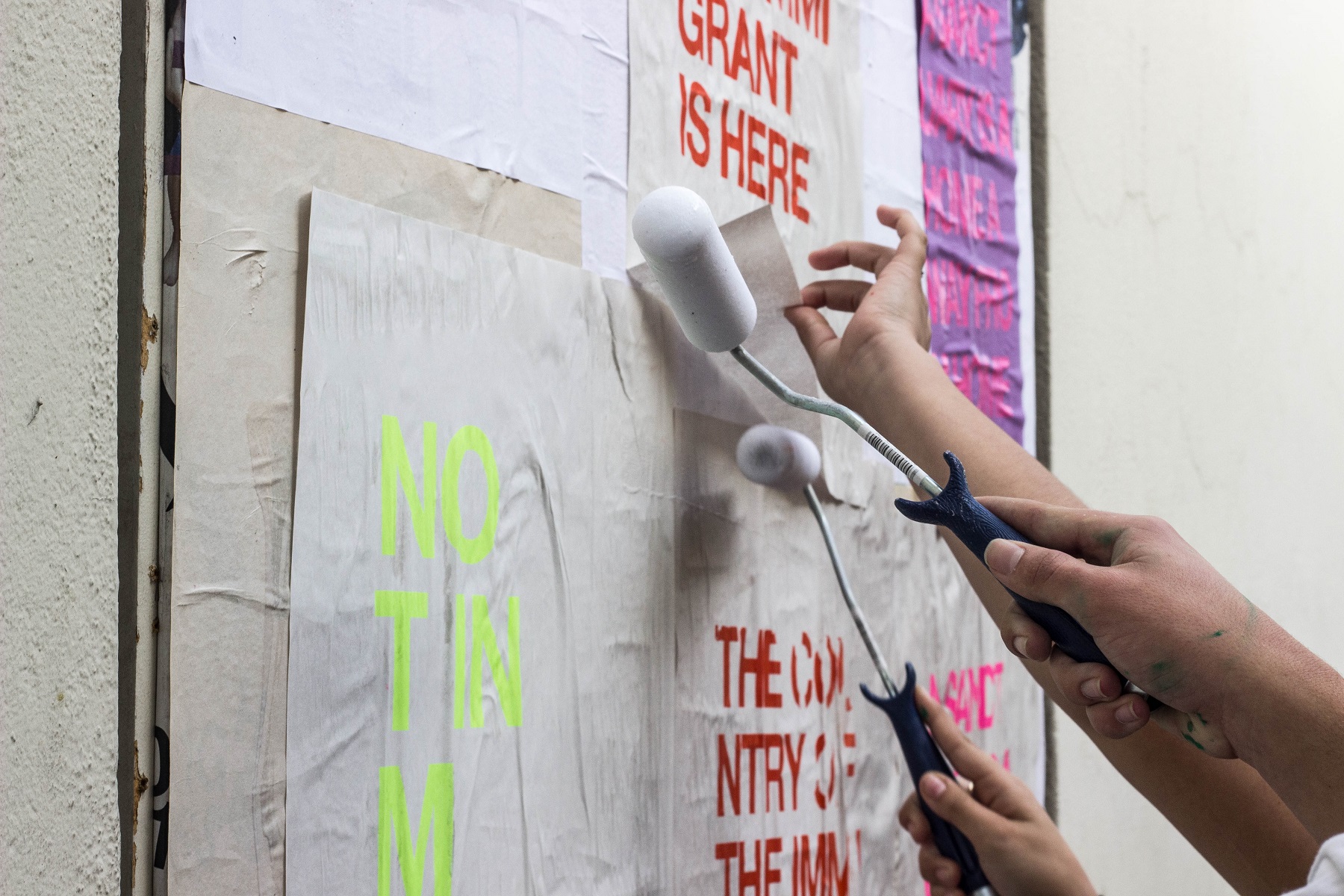 About The Sanctuary City Project and the Artists

Since 2009, artists Sergio De La Torre and Chris Treggiari have collaborated on The Sanctuary City Project.

Sergio De La Torre has worked with and documented the multiple ways in which citizens reinvent themselves in the city they inhabit as well as site-specific strategies they deploy to move in and out of modernity. These works have appeared in the 10th Istanbul Biennial; Bienal Barro de America; Cleveland Performance Art Festival; Atelier Frankfurt; Centro Cultural Tijuana; YBCA; TRIBECA Film Festival; and El Festival Internacional de Cine de Morelia. Sergio De La Torre is an Associate Professor at the University of San Francisco Art and Architecture Department.

Chris Treggiari  strives to investigate how art can enter the public realm in a way that can connect wide ranges of people and neighborhoods in a variety of communities.  Chris has shown internationally including the Venice Biennale 2012 American Pavilion and nationally at venues including SFMOMA, the Torrance Art Museum, the Getty Museum, Berkeley Art Museum, Yerba Buena Center for the Arts. He has been awarded grants from the Puffin Foundation, the San Francisco Arts Commission, the Creative Work Fund, the Arts Commission of San Jose, The Seattle Center Foundation, and others. Chris has been a teaching artist in-residence at the Center for Art and Public Life at the California College of the Arts since 2013. 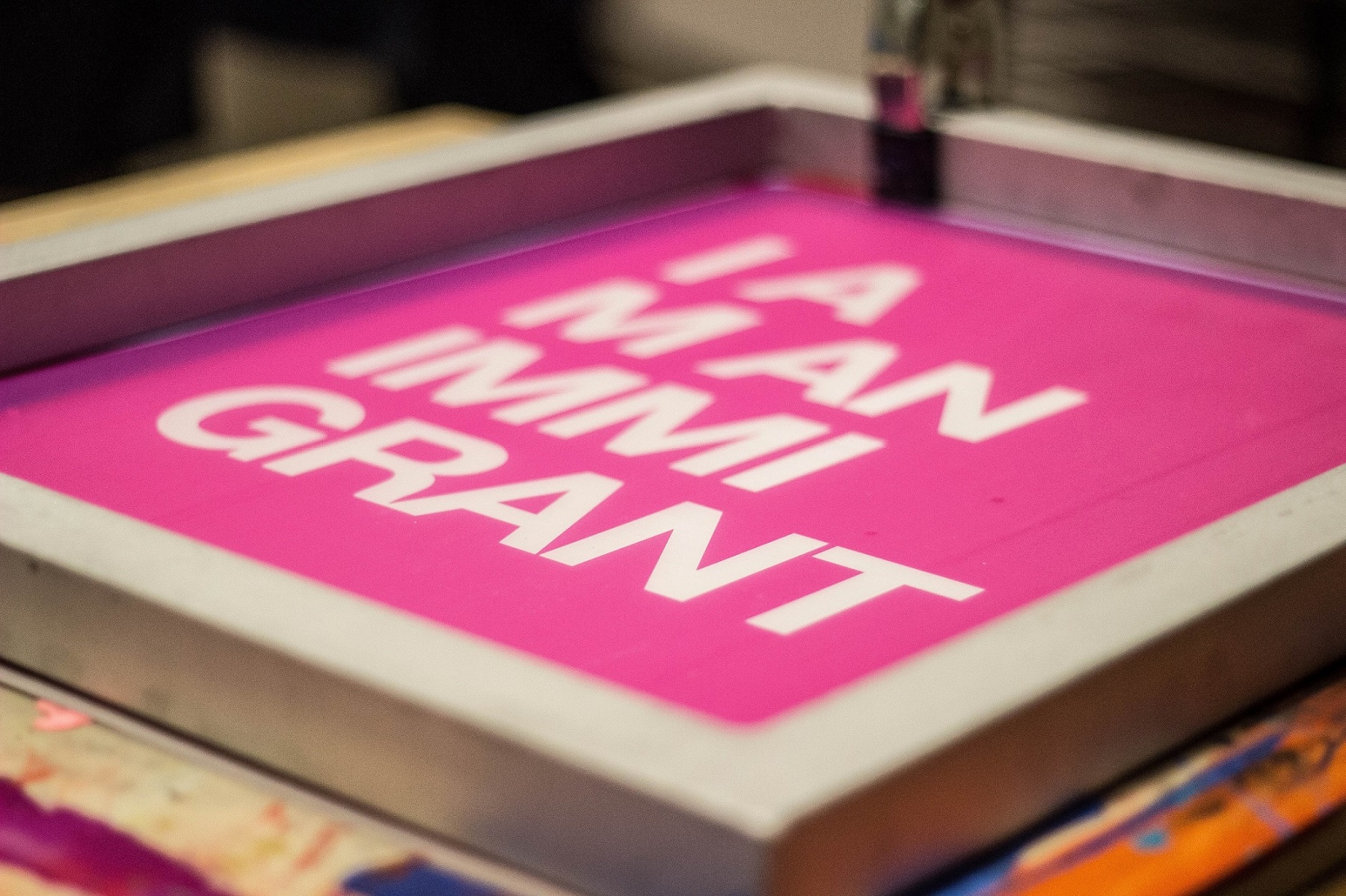 “Sanctuary Print Shop: Seattle asks ‘when did you forget you were an immigrant?’ It challenges you to consider and respond to that question for your generation, and for the generations before yours.

We consider printmaking a methodology. In the 1960s and 1970s, in the San Francisco Bay Area and in the whole country, printmaking was an important method of displaying, protesting, and speaking out about what’s on your mind. Today, it is still a great way of engaging with an audience, simply and immediately. The Sanctuary City Project is not just an art group that only shows up in white-walled places...as a satellite organization with different pop-up and public events like the Print Shop, we’re really trying to open up to everybody.

This exhibition acts as a mirror. It mirrors what is happening culturally and with policy at the federal, state, and city levels, right now and historically. You can participate in Sanctuary Print Shop if you support immigration reform, oppose immigration reform, or if you are ambivalent. What we’re asking people to do is to come together, look at this mirror, take it in, and engage through these interactive printmaking tables, which offer a powerful catalyst to start real conversations and incite further actions. How do you take those tools that you’ve been given, and then disperse them? That’s the important question.

There are actions happening all over the country about immigration issues, and Sanctuary Print Shop is part of it. Every six months since 2016, you see a major immigrants rights protest in the US, but we’ve done this project for twelve years and we know it’s not a new issue. What we would like to see is young people getting engaged. It’s so important for kids, for everyone, to understand their place in history. Symbolically, making a poster is participation... People are confused about what they can do to have their voice heard or be part of a larger movement that doesn’t necessarily represent them as individuals, but does represent their values. If you want to see immigration reform, then you should be part of this.” 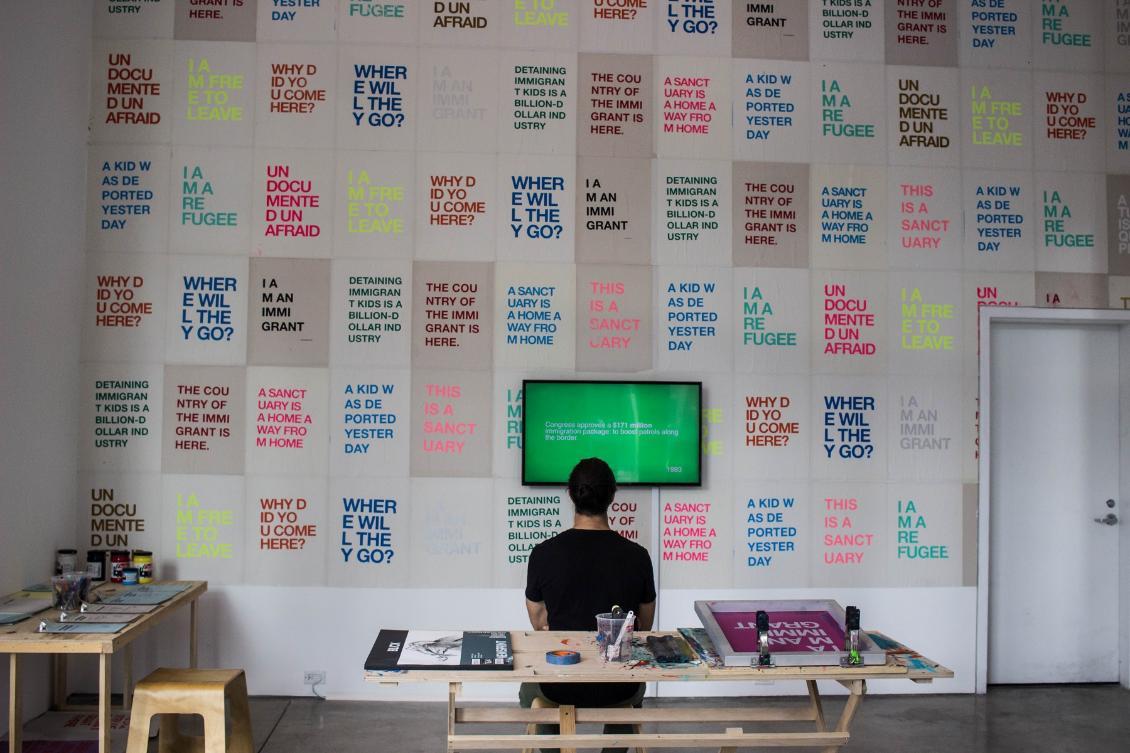