“Mind and Body: Gloria Anzaldúa, Xicanísima, and Beyond”

On Saturday, February 22, 2020, people from across the country gathered at Seattle University in Washington State for an all day symposium, “Mind and Body: Gloria Anzaldúa, Xicanísima, and Beyond” featuring award-winning and internationally renowned academics, writers, poets, artists, students, and alumni within "othered" Mexican/Chicanx/Latinx, People of Color, im/migrant, and LGTBQ+ communities. 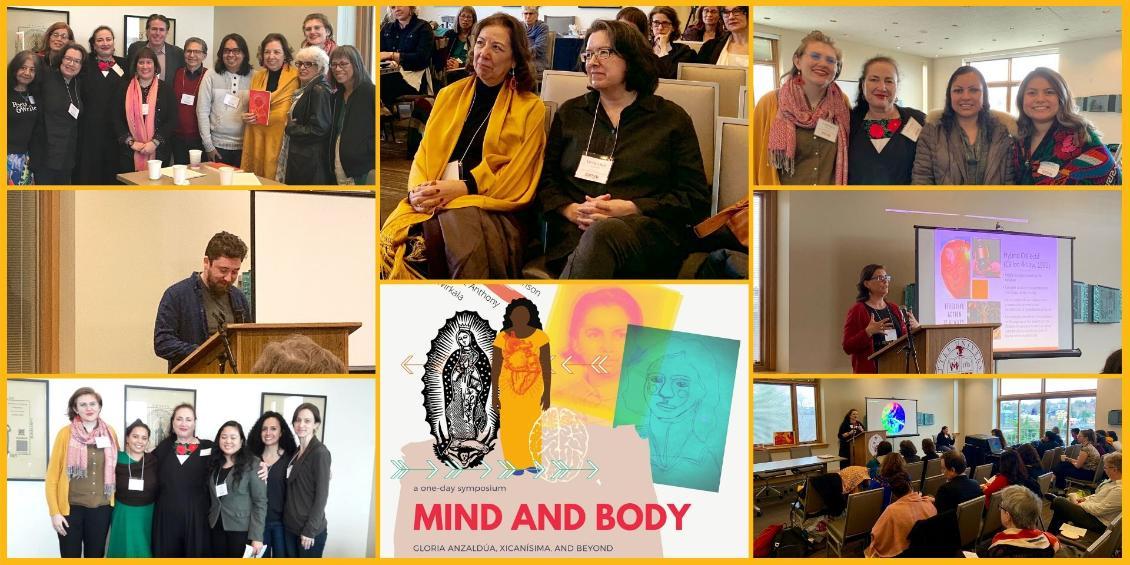 Demetria Martínez, acclaimed author of Mother Tongue, opened the conference with moving stories and poems, addressing border issues past and present in her talk, “¿What Then Shall We Do?: Crossing Borders of Conscience.” During the Sanctuary movement of the 80’s, she worked as a journalist and documented stories of Salvadoran refugees crossing into the U.S. She was vilified and tried for conspiracy against the U.S. government for her work, the only person in U.S. history to have had her poetry used against her in a court of law.

Dr. Gabriella Gutiérrez y Muhs, professor of modern languages, women and gender studies, and Theiline Pigott McCone Chair in the Humanities, organized this 12 hour symposium, and noted the perils of tokenizing a single voice to represent marginalized communities. She shared that she has dedicated part of her life’s work to writing literary criticism and highlighting the works of other Chicana authors, otherwise greatly ignored by mainstream culture. She has thus far published two critical readers with essays on the works of Helena María Viramontes (Rebozos de Palabras) and Norma Elia Cantú (Word Images). Gutiérrez y Muhs also called on the power of the university to unify, in a world where people of color and impoverished communities are still marginalized.

Setting the tone for the day, the morning was designed to educate the audience about Anzaldúa’s life and works, with several references to Borderlands/La Frontera and This Bridge Called My Back.  Dr. Gutiérrez y Muhs opened the first plenary with her presentation, “If not Anzaldúa, who?” emphasizing the importance of celebrating and supporting living theorists, unlike Anzaldúa who died in poverty and without insulin.  Dr. Norma Elia Cantú, founder of the Society for the Study of Gloria Anzaldúa, presented “Doing Work that Matters:  Personal Thoughts on Anzaldúa for the 21st Century” and Dr. Jodi O’Brien also presented, “Embodying Boundaries and Contradictions: Gloria Anzaldúa’s Contributions to LGBTQ Studies.”

The full program of speakers and titles of their presentations may be viewed here.

Among the topics, Nepantleras of many kinds: Alumna, Syrian and Indian immigrant women, queer women in the sciences, activists, and creatives.

People from the Seattle University community were in attendance: alumna, and their children, as well as former food service workers, current students, and professors from neighboring universities. The day hosted exemplary speakers who presented rich and engaging interdisciplinary work; two ASL interpreters provided translation of the event in its entirety, ensuring accessibility for deaf and hard-of-hearing people. It was a unique and beautiful event, with people of all ages present, welcoming of parents and their children, and friends new and old.

A baby is not often welcome in academic settings, and this highlights the inaccessibility women, especially, face at academic institutions. Throughout the day, young Khaleel was passed around and doted on, in between plenaries and meals.

After the Alumna shared their perspectives on life post-graduation, Dr. Cantú asked if they had considered pursuing a PhD. This was such a beautiful and important moment, not only for the panelists, but for everyone in the room, to witness communal empowerment. When people in whom we can see ourselves pose questions like that, we are able to envision new potential versions of who we may become. Because someone believes in us, it becomes easier to believe in ourselves. Moments like these illuminated the day’s themes of Xicanisima, Anzaldúan philosophies, and collective care for Mind and Body.