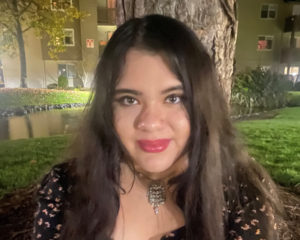 My name is Lupita Corona (She/Her/Hers), and as the External Affairs Intern, I am the newest member of the Seattle Office of Immigrant and Refugee Affairs (OIRA). I am a first-generation student attending Seattle University and a junior majoring in international studies with a minor in political science.

My family immigrated to the United States before I was born. But that never stopped my mother and father from ensuring that I developed pride for our Mexican culture. We celebrated all the holidays we could, from “El Dia de los Muertos” (Day of the Dead) to “El Dia del Grito” (Mexican Independence Day). They also ensured that I always practiced and improved my Spanish-language skills.

It took my father 10 years to become a U.S. citizen, and I was honored to have helped him throughout this process. Every night, he would come home to write and recite various passages from his citizenship prep book. He would practice his English with me daily. Organizations throughout Seattle were also able to provide further assistance for my father, such as legal help. On July 4th of 2009, the summer I turned 8, my family and I spent the morning at the Seattle Center House. We wore our fanciest attire and waited for my father to show up on stage. On that stage, he and around fifty others became U.S. citizens. I remember how my mother tried to hold back tears as my father took his oath of allegiance to the United States.

My family is what is known as a “mixed status family.” Members of our family have different immigration statuses, from U.S. citizen to green card holder. Thus, we have always been quite anxious about changes in federal immigration policies. At a young age, I was still having trouble grasping this concept, and I didn’t fully understand its impact. Our immigration statuses weren’t the only thing that worried us. One day, while riding the bus, a boy taunted me by asking out loud, “What have Mexicans ever done for this country?” and referring to me as a “dirty immigrant.” This racist incident made me realize the negative attitudes against Mexican Americans in the United States. During that time, I had no knowledge of Chicano history. I had not learned in any classroom that so much Mexican labor has helped build the United States. And lastly, I didn’t understand why he assumed my documentation status based on my ethnicity

Then during the 2016 presidential election, candidate Trump repetitively described Mexican immigrants as “criminals” and “lazy.” My family experienced a significant increase in harassment. We heard a lot of, “Build that wall,” and “Get out of this country.” Despite this, I was inspired to witness so many Latinx folks protesting, organizing, and even running for elected positions. This drove me to volunteer for a variety of Latinx nonprofit organizations so that I could help my community. I assisted in English-language classes, children daycares, voter registration, locating direct services, translating, and more. I fell in love with advocacy work, and I want to do more.

Once I graduate from Seattle University, I plan on attending law school. I hope to pursue a career as a lawyer and help provide legal advice for families who might fear seeking help due to their immigration status. The opportunity of interning at OIRA will help me gain a deeper perspective of immigrant community needs. I hope to learn how the City implements policies beneficial to immigrants. The knowledge I gain in this position, will further guide me in my advocacy work. I believe that all families deserve to be together, and we must continue policies that will protect every family regardless of status.

Originally published in “Welcome Seattle,” the official blog of the City of Seattle Office of Immigrant and Refugee Affairs.