Seattle U student Serena Oduro is a finalist for both the Marshall Scholarship and Rhodes Scholarship, among the most prestigious national fellowships. 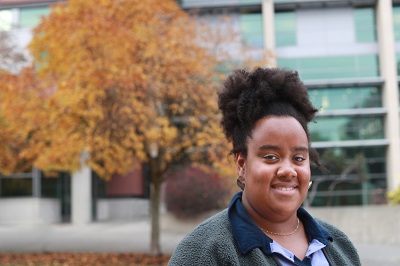 “Serena has an impressive talent for both thinking big about complex important issues and delving deeply into a subject to tease out important nuances,” said Dr. Theresa Earenfight, Director, Office of Fellowships and Student Research; Program Director, Women and Gender Studies; and Professor, History. “And she does this with the innate skills of a diplomat who is interested in bringing groups together to work on some of the most vexing problems we face on the ethics of technology in a global context.”

Serena will graduate from Seattle University in 2020 as a Sullivan Scholar with a major in History and minors in Business Administration, Chinese, and Philosophy. She has pursued her interests in art, media, and human rights as a Fulbright UK Summer Institute recipient, Marketing Intern at the Whitney Museum of American Art, and Humanity in Action Warsaw fellow. Serena is co-president of Seattle University’s nationally competitive Ethics Bowl team. She is also a member of the College of Arts and Sciences Leadership Committee on Intersectionality and Justice. After Seattle University, Serena plans to pursue a Master’s in Internet Policy to bring her academic and philosophical lens to the fore of the online landscape.

The final recipients for the scholarships will be announced in late November.

About the Marshall Scholarship

Founded by a 1953 Act of Parliament, and named in honor of US Secretary of State George C Marshall, the Scholarships commemorate the humane ideals of the Marshall Plan and they express the continuing gratitude of the British people to their American counterparts.

Marshall Scholarships are mainly funded by the Foreign and Commonwealth Office and are overseen by the Marshall Aid Commemoration Commission. The Secretariat is provided by the Association of Commonwealth Universities. In the US the selection process is managed by the regional Consulates General in Atlanta, Boston, Chicago, Houston, Los Angeles, New York and San Francisco, and in Washington DC by the British Embassy.

About the Rhodes Scholarship

The Rhodes Scholarships are the oldest and most celebrated international fellowship awards in the world. Each year 32 young students from the United States are selected as Rhodes Scholars, through a decentralized process representing the 50 states, the District of Columbia, and the U.S. territories. Applicants from more than 320 American colleges and universities have been selected as Rhodes Scholars. In most years, even after a century of competition, a Rhodes Scholar is selected from an institution which has not formerly supplied a successful applicant.

Rhodes Scholars are chosen not only for their outstanding scholarly achievements, but for their character, commitment to others and to the common good, and for their potential for leadership in whatever domains their careers may lead. The Rhodes Trust, a British charity established to honor the will and bequest of Cecil J. Rhodes, provides full financial support for Rhodes Scholars to pursue a degree or degrees at the University of Oxford in the United Kingdom in partnership with the Second Century Founder, John McCall MacBain and other generous benefactors. Upon Cecil Rhodes' death, the scholarships were created in 1902. The first Rhodes Scholars arrived at Oxford in 1903 and the first U.S. Rhodes Scholars entered Oxford in 1904.