The Film Program and Seattle University are official sponsors of the Society for Cinema and Media Studies conference, the largest international conference devoted to the research and teaching of film and media studies. More than 3,000 scholars and practitioners will be in Seattle March 13 through 17 to present and hear new research; network, mentor, and collaborate; and promote the field of cinema and media studies among its practitioners, to other disciplines, and to the public at large.

“This is just one example of how Seattle U Film Studies connects our students to different film and media communities, from practitioners and studios who make media to the curatorial and academic communities who study and preserve them,” says Chair Dr. Kirsten Thompson. “Our students will be volunteering at the conference, meeting industry professionals and making local and national connections that will help move their careers forward.”

“Evergreen Media: Film, Television, and New Media in Seattle" will be presented at the SIFF Egyptian Theater from 7 to 9 p.m.  Tickets are free and available online. 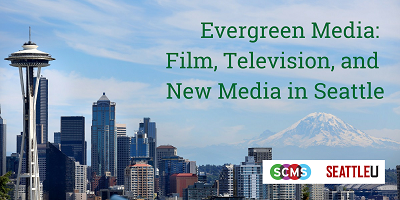 Though overshadowed by filmmaking in Los Angeles, New York, and other U.S. cities, Seattle boasts a vibrant, progressive filmmaking community and cinephile culture. With issues of the environment, homelessness, gender equality, and queer identity often at the forefront, filmmaking in Seattle and the larger Pacific Northwest region provides a unique site for cinema and media scholars to engage with relevant and emerging cultural trends. This event will feature a panel of Seattle and Pacific Northwest filmmakers and industry professionals whose work highlights the contributions of the region to broader discourses.

A screening of Evidence of the Evidence, a documentary by Alex Johnston, PhD, will be presented at 8 p.m. in a program at Northwest Film Forum called “Experiments in Resistance: Experimental Media in the Age of Mass Incarceration.” This documentary has just won Best Documentary Film in the London Short Film Festival.