Seattle University President Eduardo Peñalver has named Dr. Kirsten Moana Thompson, Professor and Director of Film Studies the 2022-2024 Theiline Pigott-McCone Chair in Humanities. The theme for programming during the two years is “Visual Culture and Media in the Humanities.” 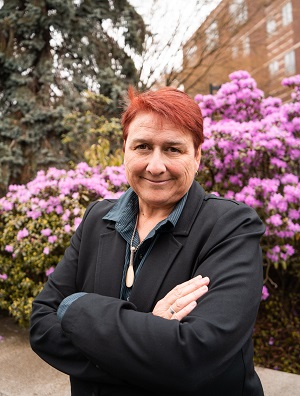 Under Dr. Thompson’s leadership, it will serve as a platform for  interdisciplinary engagement across multiple fields at a pivotal moment in the life of the university as the Strategic Directions invite us to revisit and reimagine our curriculum, enhance our interdisciplinary connections and foster the academic excellence and professional formation of our students and ourselves. As a broad collection of historical technologies, aesthetic practices and creative artforms, Dr. Thompson envisions using  visual culture as a site of inquiry in which the University community  can come together in cross-disciplinary and interdisciplinary ways. Visual studies, within which film and media studies are situated, offers a broad horizon through which to understand the aesthetic modes, technologies and discursive frames by which images and visual forms are produced, circulated, and received, as well as those theories of seeing that make the visual world intelligible.

As she outlined in her proposal:

“For the last two hundred years, technological changes in visual culture have transformed every aspect of our lives, from the media we consume to the ways in which information is communicated, art is created and work is performed. It has transformed how we interact with the world and how we understand ourselves and our lives. The nineteenth century's invention of photography and the moving image made possible the mechanical reproduction of the image, while more recently, the emergence of the internet and digital media have transformed everything from art to business, politics to communications, and culture and everyday life. It is a fundamental part of our Gen Z students' lives, mediating and informing their worlds through the phones that are extensions of their bodies, to the media they produce and consume and the ubiquitous screens that surround them. But visual culture and media also permeate our professions and disciplines, from the sciences and social sciences, to business, law, the arts, engineering, and education.

“Because visual culture is part of all our lives, it offers an ideal theme for interdisciplinary engagement across the entire college, offering a flexible and richly productive site of investigation, through which scholars and students can come together as an intellectual community engaged with our individual and collective disciplinary research. Visual Culture is a field of study that covers a very wide range of visual forms, from print and painting to fashion, advertising, maps, television, cinema, photography, video, comics/cartoons, animation, graphic novels, to new media and digital culture: in short, everything we may visualize, and everything that allows cultures to visualize themselves.”

Faculty will be invited to join annual reading groups for which stipends and texts will be offered as compensation. Each year there will be culminating symposia where faculty will present papers, along with a special guest speaker offering a Pigott-McCone Lecture, with the first year focused on visual culture and the second year on a more specialized theme within visual culture, which faculty will develop.

Dr. Thompson teaches and writes on animation and color studies, as well as Pacific, and American studies. Recent work has focused on the animated ‘useful’ film; intersectional animated surfaces in Moana; the material color history of Disney 2D animation and the ink and paint department, and the Disney promotional film. She is the author of Animation and Advertising (co-ed. M. Cook, Palgrave, 2019), the first book to examine the relationship of animation with non-theatrical media. She has also published Apocalyptic Dread: American Cinema at the Turn of the Millennium (SUNY Press, 2007); Crime Films: Investigating the Scene (Wallflower: 2007), and coedited with Terri Ginsberg Perspectives on German Cinema (GK Hall: NY, 1996), and is currently working on three other books,  Color, American Animation and Visual Culture, 1890-1960; Bubbles; and Animated America: Intermedial Promotion, from Times Square to Walt Disney.

The Theiline Pigott McCone Chair in Humanities is dedicated to promoting scholarly life among faculty. The President of Seattle University bestows this award to a member of the College of Arts and Sciences faculty who is an outstanding teacher and scholar in one of the basic humanities disciplines.