The College of Arts and Sciences is the home of Brady Battalion, Seattle University’s ROTC program, consistently ranked in the top 10 percent of the 272 College ROTC programs across the nation.

A small group, including Dean Powers, extended their stay for the special opportunity to go skydiving with the U.S. Army Golden Knights Tandem Team. 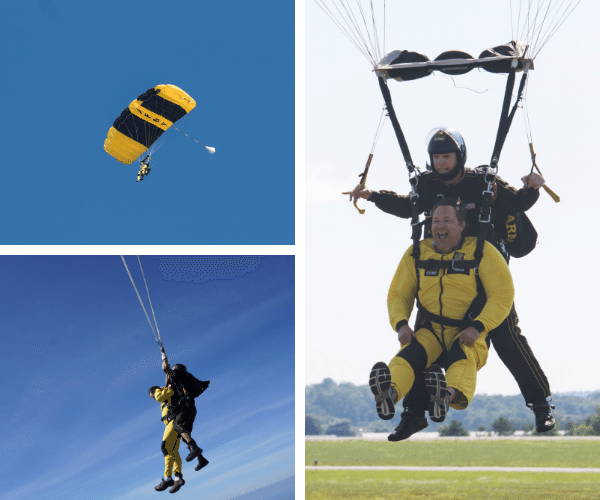 “I learned so much about the hard work our cadets do in training,” said Dean Powers, “and had a great time rappelling and skydiving, which was a bucket-list event for me!”

University leaders and other key civilians associated with ROTC from around the country were invited to the Cadet Command Headquarters at Fort Knox, Kentucky. There, they learned more about the history of the ROTC, the opportunities and experiences cadets have in the ROTC, and to experience some of the training that cadets go through in the “Advance Camp” summer training between their junior and senior year.

Along with symposia that included current cadets and officers who are former ROTC graduates, the group went through some of the training experiences, including the 60-foot tall rappelling tower and part of the leadership field training course.

The Army ROTC program at Seattle University was activated in 1951. First organized as an Ordinance unit, it was converted to a general military science program in 1955. The basic program was mandatory for all qualified male students until 1965. In that year, the entire program became optional. The Military Science Program has instructed well over 9,400 students since its inception. Over 1,400 officers have received commissions in the U.S. Army upon completion of the program. As a five-time winner of the MacArthur award, most recently in 2000, considering Leadership Development and Assessment Course performance, overall GPA, and the number of cadets being commissioned from the program, the Battalion has established a reputation for excellence in overall performance.