Working Together, Building Something New 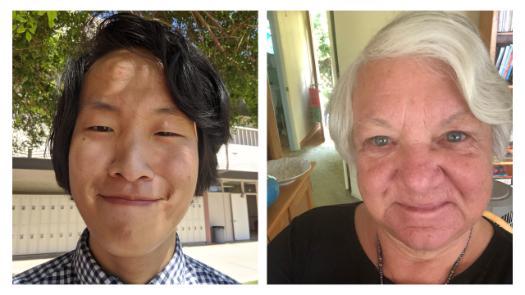 When Jonathan Choe, ’20, volunteered to interview Ann McCormick, ’67, for an alumni magazine, he had no idea that it would be the start of a meaningful and enduring mentorship. “I went in and did the interview. She gave me her number and said if you want to work with me and see what I am doing, give me a call! That summer, I was looking for things to do and decided to send her an email. She replied and said, come and join me,” said Choe.

At the time, Choe was pursuing his double major: a degree in Philosophy and a degree in Humanities for Teaching from the Matteo Ricci College. “It was not your traditional internship. We worked as consultants with one of Ann’s business partners, built a website detailing the history of a very old tree in the Bay Area and ran around doing different things. It was just a blast,” said Choe. They kept in touch and worked together on several different projects. “I never want to let go of him,” said McCormick.

The beauty of this relationship was in its reciprocal nature. “I was thrilled to hear from Jonathan in the first place and include him in what I was doing. He had good ideas, a more modern viewpoint,” said McCormick. She appreciated his ability to share innovative viewpoints, the infectious energy he brought to projects, his focus on goals and his skills in programming and data. They continued to work together throughout his junior year at Seattle University.

At the end of Choe’s senior year, McCormick contacted him with an exciting opportunity. She had a new idea: starting a project-based school in China that would focus on both social-emotional learning and traditional education. This was the start of Six Arts Academy. “A Chinese astrologer friend suggested a good name for the school would be Six Arts. The idea of mastering Six Arts is a 3,000-year-old Zhou dynasty philosophy that incorporated rites, music, archery, chariotry, calligraphy and mathematics. These were arts that all involved very deep focus, similar to Jesuit education,” said McCormick.

Choe had studied the Six Arts philosophy while at Seattle U. “One of my last classes was on virtue ethics, which has origins in Greece and China. It touches on the rules of relationships and what it means to be a noble person. When Ann told me about the Six Arts, I really liked the idea of taking abstract concepts and putting them concretely into practice. It reminded me of Jesuit spirituality. Being a contemplative in action. Contemplating about what it is you need to do and then going out and doing it. We were developing all this insight, now it was time to put it in action,” said Choe.

Ann and Jonathan got to work. They wrote documents on the school’s philosophy, links between the Six Arts and the understanding and foundations of virtue and put them online. They developed courses and started recruiting a staff. “I got to see firsthand how start-ups get off the ground and wrestled between being inspired and optimistic but also having to think about its practicality,” said Choe.  While the funding for Six Arts Academy hasn’t come together yet, Ann continues to work on the project while Jonathan is pursuing teaching high school math in Arizona. “Jonathan will always be a co-founder of Six Arts Academy and the person that stood at my side no matter what,” said McCormick.

“As a mentor, it’s important to immerse your mentee in every experience possible. I always encourage young partners to participate in the decision making at every level,” said McCormack. Jonathan’s experience working alongside Ann expanded his Jesuit values of contemplation and action. “Nothing throughout the process was off limits. That’s the wonderful thing about Ann—she’s living the process of God in all things and learning in all things,” said Choe.

Jonathan and Ann continue to enrich each other’s lives. Inspired by their own connection, they are encouraging everyone in our alumni community to start a mentoring relationship with a current student. Seattle U students are looking for partners like you to guide them in discovering who they are and where they want to go after graduation.

Our Moment for Mission: The President’s Challenge is calling for 10,000 alumni to join us in ensuring that students continue receiving a Seattle U experience that ignites their potential. By volunteering as a mentor, you can help us reach 10,000 while also helping students to become leaders of purpose and impact.