Teresa Blanco Olympio, ’06, Shares the Impact of Life Lessons and Networking In Her Remarkably Successful Career

Posted by Seattle University Alumni Association on Thursday, October 7, 2021 at 12:00 AM PDT 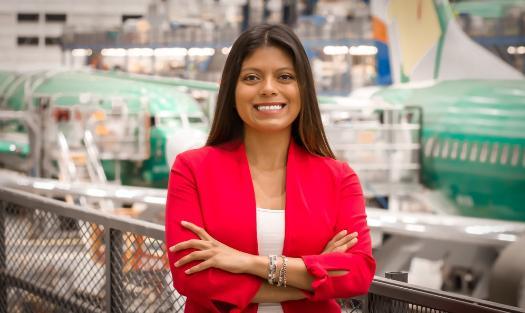 National Hispanic Heritage Month, Sept. 15 – Oct. 15, recognizes the contributions of Hispanic Americans to the history, culture and achievements of the United States. Seattle University is blessed by the many promising Hispanic students and accomplished alumni who have spent their student experience on our campus. Teresa Blanco Olympio, ’06, is one of these alumni. She began her life in a remote village in the mountains of Mexico and now at 39, serves as the Senior Director, BCA Production Systems at The Boeing Company, the first and only Hispanic female to hold this senior executive-level position in manufacturing in the company’s history. She also serves on Boeing’s first Racial Equity Task Force, a team of 25 company-wide leaders who are driving the company’s racial equity strategy in direct partnership with CEO Dave Calhoun and the Executive Council. Olympio credits life lessons learned and the power of networking in her professional success.

Humble Beginnings
Olympio’s parents migrated to the U.S. from Mexico in 1979. Unable to speak English, they found work in orchards and packing sheds in Chelan, Wash. Teresa is the second of the couple’s five girls, all born in the U.S. However, because their parents couldn’t afford childcare, the girls were sent to live with their grandparents in the village of San Jose de la Montana in the Mexican state of Michoacan. They attended school in Chelan starting in the first grade but returned to Mexico each summer until middle school when they became involved in sports and other activities.

“I remember my first days of school vividly,” Olympio says, “because they were very painful. I felt excluded because I couldn’t speak or understand English.”

She didn’t like attending ESL classes so in a demonstration of the “can do” attitude that would underly her future success, Olympio learned the language quickly, and by second grade was no longer in ESL classes.

Olympio’s inspiration to attend college was influenced by her college-bound friends. She’d never had a mentor and no one in her family had ever talked to her about careers. She visited three universities while in high school, Gonzaga, the University of Washington and Seattle U, and decided Seattle U was the place for her.

“I chose Seattle U for a lot of reasons,” she says, “It was in a big city, but the campus didn’t feel like a big city. People were friendly, and on the campus tour the leaders talked a lot about the community and giving back, which resonated with me. Also, I grew-up in a Catholic family, and the school had values similar to my own. It was the right fit.”

She applied to Seattle U and was accepted.

Tough Situations
I always tell folks, when in a tough situation, you can choose to make the most of it or let it impact you in a negative way. I’ve never been a negative person, so the only option I ever see is to make things work.

Throughout high school, Olympio had been active in Future Farmers of America (FFA), competing in speaking events at the national level. This experience would serve her well in her professional career. She ran for FFA Vice President, a state office, during her senior year and won. It was a fantastic leadership opportunity, although it would delay her college start for a year.

Then, a few months before the end of her term, Olympio became pregnant. She resigned her office, moved out of her parents’ home, rented an apartment and began working fulltime at Farmers Insurance. She had to put the well-being of her daughter first.

Things were tough, but Olympio’s dream of attending college remained alive. With the support of her sisters who helped with childcare and an understanding boss who allowed for flexibility in her work schedule, she enrolled fulltime in Wenatchee Valley Community College. After two years she graduated with honors and an AA degree.

On to Seattle U
Pursuing her dream of a four-year degree, Olympio transferred to Seattle U as a junior majoring in business. Her parents offered to care for Jomary, Olympio’s young daughter, in Chelan so she could focus on school. Olympio financed her Seattle U education with scholarships, student loans and part-time jobs. She lived on campus and studied hard during the week, then traveled to Chelan on weekends to be with her daughter. After two years, she graduated cum laude with a B.A. in Business Administration. She remained engaged with Seattle U for a time, serving on the Alumni Board of Governors

A Meteoric Career Trajectory at The Boeing Company
Olympio’s Boeing career began shortly after graduation with a tip from a Seattle U graduate student she’d met who was a Boeing employee. The grad student was moving to another position and encouraged Olympio to apply for her old job as a cost estimator in the Interiors Responsibility Center. Olympio interviewed for the position and was hired.

Over the next 15 years, she rose quickly through the ranks at Boeing, learning the entire value stream of supply chain. In her first supply chain post, she worked directly with executives, one of which encouraged her to apply for Boeing’s Leadership Development Excellence Program, designed for employees with future leadership potential. She was accepted into the program, a two-year opportunity to learn and network.

After graduating from the leadership program, Olympio was rotated to a position in the factory where she came to fully understand the production system: how airplanes are built, how quality control works, supply chain and what happens when mechanics don’t have the parts they need.

“The person who made this rotation happen was an executive I’d met in my first couple of years at Boeing,” she says, “The power of networking can’t be overstated! I grew some really tough skin in this position. I got yelled at by both sides, but I loved being in the factory because there’s so much going on.”

After two years in the factory, another mentor told Olympio it was time she got some hands-on experience in procurement. She moved to the 787 program, working with airline customers and designers, managing projects to deliver the interiors that customers wanted. This position, Olympio shares, added another layer to her tough skin.

“I do well in high stress situations with complex integration,” she explains. “As a procurement agent I had to pull together engineering, supply chain, manufacturing and multiple suppliers. I moved my desk right next to our engineering team because it was the best way to learn the technical side.”

During this time Olympio joined Boeing’s new Emerging Leaders Program. She was very active and vocal, helping to design the program and pave the way for future emerging leaders.

After completing the program, her career trajectory moved into international work. Olympio’s first managerial role in procurement required travel to Germany, New Zealand and London. After a couple years, she was promoted to Senior Manager, Field Operations in Japan. Still in her early thirties, Olympio was the first female ever to hold this position.

“It was challenging to work in a culture where there aren’t a lot of women in leadership positions,” she says. “But I knew what I was doing and I worked hard at solving some quality issues with our Japanese suppliers to get the product out the door while earning the suppliers’ trust.”

During her time in Japan, Olympio remained connected to her U.S. teams in Everett, WA and Charleston, NC. “I’d observed that when you go out in the field and stay too long you can get “lost” in terms of being considered for career progression opportunities because you’re not present,” she says. “I didn’t want to get lost.”

After returning to the States, Olympio wanted to get back in the factory and requested a rotation into fabrication. “I wanted this rotation because I think that salaried employees tend to lose sight of the challenges that hourly employees face. The environment is very different than in the salaried world. I wanted to get that hands-on experience with our union representative, work through a grievance and learn about union language and contracts. The only way to do that is to live it, so I did for one year.”

Olympio’s leadership style was getting noticed at the executive level, and her name began to be put forward on interview slates for executive positions. The first executive-level job she landed was as a director with a newly formed enterprise team, Global Field Operations. She was charged with setting-up new structures that entailed a lot of integration, calling upon her experience in supply chain, field operations and international. From there she was interviewed for another promotion.

“The hiring manager was looking for someone with deep manufacturing experience,” she says. “I hadn’t grown-up in manufacturing, but my approach was to talk about my diversity of experiences in which I’d accumulated more experience than a traditional manufacturing leader. I’d spent time in many factories and understood production systems.”

This successful interview landed Olympio her current position of Senior Director, BCA Boeing Production Systems. In a span of 18 months, she’d been promoted from an entry-level executive to a senior executive.

She again emphasizes the power of networking. “The reason my name was placed on that interview slate was because a Senior Vice President in my network brought it forward in discussion. I am the only person under 40 and the first and only Hispanic female in manufacturing to achieve this executive level.”

Shortly after starting this new position, Olympio was invited to participate on The Boeing Company’s first Racial Equity Task Force.

“When I joined Boeing, there was no one who looked like me in senior executive roles,” Olympio recalls. “Now I’m here, and when new Hispanic employees come in, they can see someone who looks like them and who shares a similar background and I think that’s powerful. I have a platform that’s not available to a lot of leaders who look like me, and if I can use that platform and my voice to raise others up and show there is a path for them from management into executive positions, then that is success.”

Re-engaging with Seattle U
This fall, Olympio will return to Seattle U as a mentor for students in the Albers School, helping them to hone their business acumen. “Seattle U provided me a superior education that I don’t believe I would have received elsewhere. I appreciate all the time my professors took to answer my questions and open my eyes to issues around work that are not in the textbooks. My Seattle U education is the foundation to my career success. I look forward to mentoring business students, some who may be future Boeing employees.”