Posted by The Seattle University Alumni Association on Wednesday, November 4, 2020 at 12:47 PM PST 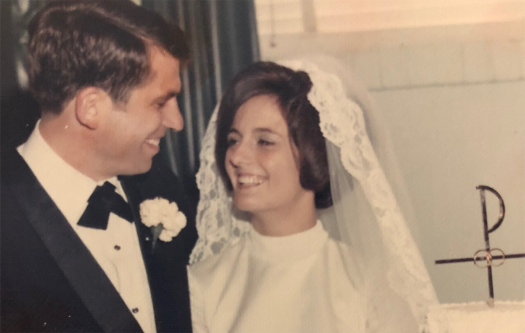 Jeanie (Mallette) Robinson, ’70, ’93, ’05 and Tom Robinson, ’69 met in the student union building, now Hunthausen Hall, in 1968 to discuss finances for the SPURS organization. “As president of SPURS, I requested funding for a club event from Tom, the treasurer of the student body. He approved the request with one of his own: “How about a hot date with the treasurer?”

This funny anecdote was the start of their relationship. Eighteen months later Tom proposed to Jeanie by pulling her out of a library study session with an engagement ring in his pocket. They ended up getting married exactly two years to the day after their initial meeting.

It’s not surprising that one of their favorite memories of their time at Seattle University was finding each other. Tom and Jeanie chose to attend Seattle University for different reasons. Jeanie’s main motivation was a desire to move out of the small town of Shelby, Montana and explore the big city. Tom graduated from Seattle Preparatory School in 1964 and spent the following year as a Jesuit Volunteer. “After that, Seattle U with the Jesuits was my first and only choice,” he said.

While at Seattle U, both Jeanie and Tom spent a majority of their extracurricular time in companion service groups and student government. Jeanie was involved in the SPURS, a women’s service organization, and later became president of the Women Students (AWS). Tom was an active member of Alpha Phi Omega, a service-orientated fraternity, and the treasurer of the student body “My experience at SU with the formal education and involvement in student activities gave me the inspiration and confidence to start some businesses that continue to prosper today,” added Tom. Beyond classes and activities, Jeanie remembers the turmoil of the late 60s. One event especially shaped her senior year experience.

The Vietnam War was waging overseas when National Guard troops shot and killed four student protestors at Kent State University in May of 1970. That event sparked anti-war protest movements across college campuses. “As leaders in student government, we voted to include SU in the protests, starting a march from the library steps, onto I-5 and eventually ending at the Federal Courthouse,” Jeanie recalled. This event was a part of a national week of student-led strikes and is seen as one of the largest protest movements in Washington state.

Jeanie and Tom talked about how the current unrest in our world parallels the earlier time: “Now more than ever, Seattle U’s mission to help create a just and humane society is vital, not only for the people of the earth but for the earth itself. Seattle U’s concern for the environment is our concern also. The mission of the university is the reason we contribute to Seattle U and continue to be involved."

Tom and Jeanie's love of Seattle U hasn't wavered over the last 50 years either. They serve as volunteers for a Campaign for the Uncommon Good (or Jesuit Mission and Student Development Task Force) and have attended numerous Seattle U events, lectures and galas throughout the years. They have supported the university financially and are currently President’s Club and Legacy Society members.

Jeanie and Tom are excited and proud to support Seattle U’s future. They are both eagerly anticipating attending the virtual 50+ Class reunion on November 14 to reconnect with their SPURS and Alpha Phi Omega friends and help us reach our Our Moment for Mission: The President’s Challenge goal of engaging with 10,000 alumni within the life of the university. Find out how you can get involved with the President’s Challenge and ensure that future students will continue to move forward with purpose and impact our world for the better.