Redhawks Gear Up for an Exciting Season 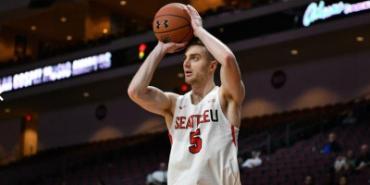 After finishing last season with its first 20-win Division 1 season since 1964, the men’s basketball team is looking forward to an even better season this year. The Redhawks finished 2017-18 20-14 overall, 16-3 on their home court and 8-6 in Western Athletic Conference play. The season culminated in the program's third national postseason tournament appearance in the past four seasons—a berth in the Collegiate Basketball Invitational (CBI).

The Redhawks bring the momentum of the record-breaking season to this year’s team, returning four letter winners in Morgan Means, Matej Kavas, Mattia Da Campo and Aaron Nettles. In addition, a trio of transfers who spent the 2017-18 season redshirting at Seattle U will immediately infuse the Seattle U line-up. Myles Carter, a 6-9 forward from Seton Hall, Delante Jones, a 6-5 guard from American, and Dashawn McDowell, a 6-5 guard from Southern Methodist University, will bring experience and new energy to the team. The Redhawks have also added nine new players, including seven freshmen and two transfers.

Kavas has been named a preseason All-WAC First Team selection by both the league’s nine head coaches and the WAC media. The 6-8 guard was the Redhawks’ leading scorer in 2017-18, averaging 15.2 points per game. He led the WAC with 91 three-pointers and finished the year ranked eighth in the nation, hitting 46.4 percent from beyond the arc.

Basketball fans anxious to see some action need not wait much longer. The men’s basketball team kicks off its season on November 6 at Stanford. The Bay Area alumni chapter and SU Athletics are hosting a rally before the game to get fans pumped up! Two-days later, The Redhawks play their first home game against the University of Puget Sound on November 8 at the Redhawk Center.

Show Your Redhawk Pride at Homecoming!
If that wasn’t enough excitement for you, the Redhawks play their Homecoming game against Bryant at the accesso ShoWare Center on November 11. We want to pack those stand with alumni fans and to make it easier, we are giving you a ride in the first ever alumni party bus! As the name implies, we are bringing the Homecoming party from Seattle to Kent. Not only do you not need to worry about the hassle of parking, but your ticket on the alumni party bus includes a Homecoming game ticket, complimentary beer and wine, snacks provided by Whole Foods Market, and a round-trip ride from Seattle U to the accesso ShoWare Center. You can reserve your seat here.