Alexandra “Ally” Kennedy is the recipient of the 2017 Outstanding Recent Alumna Award, recognized for her tireless advocacy on behalf of undocumented immigrants and her innovation in creating a national network to support immigration attorneys who are women and mothers.

A 2008 graduate of Seattle University’s School of Law, Ally is the founding partner of Alexandra Kennedy Immigration Law, PLLC. The firm’s goal is to keep families together through the use of the U.S. immigration system. In her practice, she helps victims of violence and domestic violence seek immigration relief and defends clients in immigration court who are facing deportation. Ally has brought cases before the Board of Immigration Appeals and made oral arguments before the Ninth Circuit Court of Appeals. “Being a lawyer is more than a job,” she says. “It is a calling.”

While in law school, Ally secured a prestigious judicial externship with the Department of Justice’s Seattle Immigration Court.

Ally worked with SU Law’s Externship Director to create the program.  “I was privileged with a unique opportunity to see behind the scenes,” Ally says, “to understand the judges’ thought processes, what the Department of Homeland Security attorneys do and how they work and what kind of behavior judges want to see from private immigration attorneys.”

Because of the ground work Ally laid, the internship has continued and SU law students can now gain valuable experience working in the federal immigration courts. Ally has stayed involved at her alma mater through mentoring law students, offering internships in her firm and remaining connected with other SU law alumni.

For Ally, an interest in law started at age 16 following a mission trip to Belize and Guatemala where she was exposed to real poverty for the first time.

“I decided I would do everything I could to fight for equality and give a voice to the voiceless,” she says. “Fortunately, I have been able to find a way to do this by defending undocumented immigrants in the United States.”

Her passion for immigration justice is only matched by her passion for being a mother. In 2015, Ally founded the national organization AMIGA Lawyers—also known as the Association of Mother Immigration Attorneys—designed to help mothers who are attorneys who needed support while “doing it all.” She has created a virtual community where AMIGA members can discuss all areas of their lives and provide support, uplift and empower one another. Her Whole-istic Approach to the Practice of Law  is a way for women to practice law that integrates their whole selves.

Each week, Ally blogs about how to build better businesses, create winning cases and live balanced lives. She hosts monthly webinars and travels throughout the country to speak on these topics. In June 2016 she hosted the first conference for women immigration attorneys, called Women, Power and Money, and in February 2017 she hosted a women-only legal conference called Amiga Business Bootcamp.

In 2016, Ally was awarded the national Sam Williamson Mentor Award by the American Immigration Lawyers Association for her work with AMIGA—the youngest recipient ever. 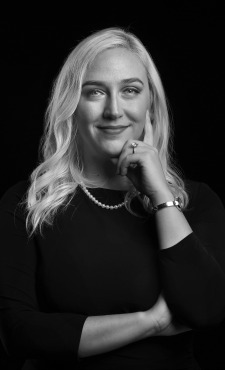