“Never underestimate the power of a few committed people to change the world. Indeed, it is the only thing that ever has.”
—Margaret Mead

Carolyn Ronis, '03, '06, JD, is changing the world. For this work, she is the recipient of the 2017 Seattle University Community Service Award.

Following high school Carolyn enlisted in the United States Air Force, where she trained the first groups of female navigators and then joined Air Force intelligence. Undeterred by a climate of sexism and hostility, she persevered and was awarded Outstanding Airman of the Year.

After her honorable discharge, Carolyn struggled for several years as a single mom of two small children before entering Seattle University. First in her family to graduate from college, she earned a philosophy degree and says she is grateful to the university for the gift of empowerment that put her on the road to self-discovery.

Of professors Dan Dombrowski, Rob Deltete and Paul Fitterer, S.J., she says, “They challenged me every day to look deeper, think bigger and follow my dreams. They had a profound and life-changing impact on my life.”

Encouraged by a Seattle U law alumna, she enrolled in the School of Law and worked part-time for the state Attorney General’s office advocating on behalf of abused and neglected children. And she did all of this while caring for her children and her terminally ill mother.

Shortly after graduation, she moved to Washington, D.C. Her work reinforced a commitment to helping children. She was a pro bono lawyer for Kids in Need of Defense (KIND) and championed civil rights, immigration and campaign finance reform with the U.S. House Judiciary Committee. As counsel for Congressman Bobby Scott she worked on legislation and issues before the Judiciary and Education Committees such as criminal justice reform, the Voting Rights Act and the Youth Promise Act.

In 2014, Carolyn, now the mother of four, heard about the Chibok girls being kidnapped by the world’s deadliest terror organization, Boko Haram. She felt compelled to act and established the International Coalition for the Eradication of Hunger and Abuse (ICEHA). The organization addresses the plight of children caught in areas devastated by war and extreme poverty. Combining safe sanctuary, critically needed basic services and programs to diagnose PTSD and administer emotional healing, Carolyn offers people hope. She believes that the emotional wounds of war must be healed in order to stop the perpetuation of violence from one generation to the next.

Carolyn partnered with elementary school children in Virginia to collect one ton of school supplies which she personally delivered to Northern Nigeria. “Carolyn traveled to Displaced Persons Settlements in conflict-affected areas under heavy threat from Boko Haram terror attacks to ensure that the much needed supplies ended up in the hands of the children who needed them,” noted her award nominator, Robert Dunphy.

ICEHA offers empowerment through financial independence, literacy, scholarships, technical training, counseling, mentoring, and self- sufficiency for the individual as well as the community. ICEHA promotes entrepreneurship and self-employment. “It is a hand up, not a hand out,” Carolyn notes, “a sustainable, preventive approach.”

A stage four cancer survivor, Carolyn has dedicated herself to improving the lives of others. She reinvests much of her salary as ICEHA’s director toward the future growth of that organization. Again, according to her nominator, “Carolyn’s life is a testament to social service and how one person can affect such amazing change in the world. Her selfless pursuit of others is downright astonishing.” 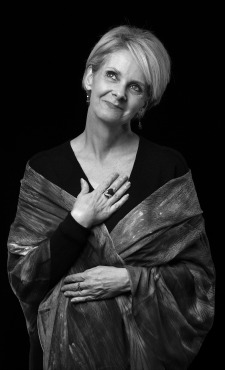