2016 Alumnus of the Year Award

ALUMNUS OF THE YEAR AWARD

Peter Morton is the 2016 Seattle University Alumnus of the Year for his contributions to the university and his extensive community engagement.

Peter was deeply involved in a partnership with the university to establish the Executive Leadership Program in the Albers School of Business and Economics.

He was approached by a member of his staff at the Boeing Center for Leadership and Learning who was completing her master’s degree at Seattle University. Sharing her concern with Peter that employees in external executive education programs were not exposed to curricula that emphasized corporate values, ethics and community responsibility, she said, “We can do better.” She proposed a partnership with Seattle University that would showcase these attributes and Peter agreed.

Fully recognizing the scope and benefits of involving a diverse set of businesses, Peter and his team invited leadership development executives from Costco, Safeco, Weyerhaeuser and the Port of Seattle to participate and joined with faculty representatives from several departments across the university. The curriculum was developed rapidly and the first Executive Leadership Program (ELP) class convened in 1998. Peter attended the second cohort himself and has assisted the business school in recruiting students to the program and to the Leadership Executive MBA.

Peter began his career at Boeing as a pilot trainer and operations engineer, helping put 707, 727, 737 and 747 aircraft into service. He managed customer training programs, was project engineer for the 757 flight deck, served in several program management assignments and eventually was promoted to vice president of the Boeing Center for Leadership and Learning. In his last assignment as vice president of Human Resources for Boeing Commercial Airplanes, he supervised 1,500 staff, which provided employment services for 100,000 workers.

After seven “career changes” in his 42-years with the company, he retired from Boeing in July of 2000.

These days, Peter enjoys volunteering at the Museum of Flight and serves as an executive coach for ELP students.

He notes, “It’s an obligation and a privilege to help the next generations.  There’s nothing quite as wonderful as seeing the light go on in a young person’s or evolving manager’s eyes. And, it does wonders for keeping me thinking young,” he says.

As a community volunteer, Peter has served on boards at the Museum of Flight, the Whidbey Island Center for the Arts, the Seattle Girls’ School and on the national scene for the Aviation Accreditation Board International.

Wanting to share his passion for airplanes, Peter has been a Young Eagles volunteer for 10 years. Since 1992, this Experimental Aircraft Association program flew two million young people between the ages of 8 and 17 in private airplanes with volunteer pilots. It is Peter’s hope that because of their experience, many of these students will experience the thrill of flight, learn about personal responsibility and perhaps pursue careers in aviation.

Peter is president of his own consulting company. His dedication to education and servant leadership aligns well with the Jesuit values that exemplify Seattle University. 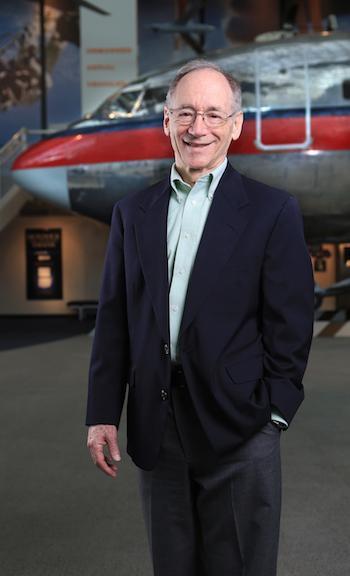