From Concept to Commencement: How Bridgette Huhtala, ’22, Shared Her Artwork with Her Graduating Class 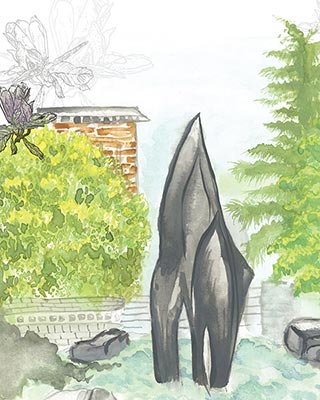 By random chance, Bridgette Huhtala, ’22, was sitting in the front row at this year’s Commencement ceremony. The day had already been filled with jubilation. But it was about to get even better.

While fellow grads were crossing the stage and receiving their scrolls, Huhtala waited patiently for her turn. “I looked across the aisle at one point,” she recalls, “and saw someone opening their scroll. It was such a thrilling feeling to see them unrolling a print of my artwork!”

To understand how Huhtala’s mixed-medium vignette of Centennial Fountain ended up in the possession of every 2022 SU graduate, we have to take a step back.

“I’ve been making art since I can remember,” says Huhtala. “I was designing infographics in elementary school and building elaborate Powerpoints in high school.”

While her parents always supported her creative endeavors, they never outrightly encouraged her to pursue a career in art.  “And so,” recalls Huhtala, “I thought I’d be a business major.”

Early in her academic career at Seattle U, Huhtala had an internship at a local skin care company. She was working in the operations side of the business, but noticed herself invariably drifting to the other side of the building.

“Every time I had a break, I’d be hanging out in the creative department – asking questions, making friends with the artists and photographers, and just soaking it all in.”

At some point, she started to realize: “This is my calling; this is where I belong.”

Soon after, she began to envision herself working in the creative industry, and possibly designing for Starbucks. She switched her major to digital design and naturally began to excel in her classes. And that’s how this story connects back to Commencement.

As graduates will know, actual diplomas are not handed out at the ceremony. When they cross the stage, graduates are given ceremonial, or placeholder, diplomas. For logistical reasons, the real diplomas arrive later in the mail.

At SUAA, we wanted graduates to be handed something meaningful; something lasting. We decided to commission student artwork, so we reached out to the College of Arts and Sciences for recommendations. They connected us with Bridgette Huhtala, one of their top students.

The parameters of the commission were simple and intentionally vague: the project should be approached as a gift for graduating students, and should include something meaningful or reminiscent of their time at Seattle University.

“In classes,” says Huhtala, “our assignments were often very specific. This project was open-ended, which was freeing and daunting at the same time.”

In addition to the artwork commission, she was completing her coursework, studying for finals, and beginning a job search (she recently took a layout and design position at Seattle Met Magazine). It was a busy time, to say the least.

After taking several days to consider and reflect, she began sketching a few ideas.  Huhtala prefers to work in mixed-medium by adding digital embellishments to drawings or paintings, and appreciates not only the flexibility of this method, but also the added depth and texture it affords.  “I like how it can give the art a more ‘lived-in’ feel,” she says.

After several rounds of rough concepts, Huhtala began to envision what her subject would be.

“For a variety of reasons, I never spent a ton of time on campus. But I always enjoyed meet-ups at the fountain. It’s such a great place to enjoy a coffee and great conversation.”

Her portrait of Centennial Fountain was painted in watercolor. The flowers, which come from one of the exceptional magnolia trees on campus, were rendered from photographs as relief print overlays using Photoshop.

Huhtala speaks of the fountain as being the heart and soul of campus; a place where meaningful connections occur without effort.

“I wanted my art to evoke that feeling for others,” she says.

As Huhtala watched her artwork being handed to every single graduate as they walked across the stage – and as she started receiving texts of praise from friends and fellow classmates – Huhtala’s time at SU hit a pleasing crescendo.

“I just hope I was able to add a tiny little bit of joy to people’s day,” she says.

We know she did.