Seattle U and the Aloha State: How Luau and the Hawaii Alumni Chapter Got Their Starts

Ask any Seattle U student what the longest running club on campus is and they are likely to say the Hawaii Club. Also known as Hui O Nani, this tight knit club describes itself as “a place for those from the islands to call their ‘home away from home’" and a place for those interested in Hawaii to understand and learn what the Aloha State is all about.” But how did one of Seattle University’s longest running clubs get its start? To get the answer, we asked Elliott Chamizo, ’66.

Elliott has long been an important part of the SU community. “In 1961 there were about eighteen of us from Hawaii at Seattle University. We were the first large group from Hawaii to come to SU and we decided it was time to start a club.”

According to Elliott, with the help and guidance of Seattle U’s Hiking Club, the group put in their request and developed a charter for the new club. By 1962 the group was organizing its first Luau.

“Seattle U didn’t have a big venue at the time, so we went off campus to the Knights of Columbus Hall up the street from campus.” The Hawaii Club students decorated the hall and had food flown in from relatives in Honolulu. “We had a real pig prepared by Islanders who lived in the Seattle area,” Elliott recalled.  “We had a great turn out. 150-200 people came out to the first luau. It was such a success that we kept having it year after year.” Luau, usually hosted in early May, quickly became an annual event the entire campus community looked forward to. 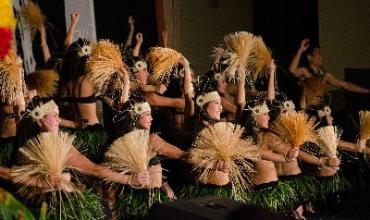 A few years ago, the club celebrated its 50th anniversary. Then club president, Keenan Kurihara, invited the founding members back to campus to celebrate. “About 15 of us returned and shared the history of the club and the founding of it.”

Despite returning to Hawaii after graduation, Seattle U has left its mark on Elliott. “I was definitely impacted by the Jesuit charism and the idea of community service.” A long-time teacher at Maryknoll High School in Honolulu, Elliott encouraged many future Redhawks to attend Seattle U, including Kurihara.

Despite annual visits by Seattle U in the past, there has not been an active alumni chapter in Hawaii until now. The Hawaii Alumni Chapter leadership committee consists of co-presidents Jennel Sesoko, ’08, and Brandi Yamauchi, ’12, events chair Jeanie Sohn, ’06, and communication chair Keenan Kurihara, ‘16.

According to the chapter’s presidents, “There's something special and unforgettable about those college years at Seattle University.  Whether it be the luau, life in the dorms, Quadstock or creating those lifelong friendships, we all have a connection to Seattle U.  From service projects to social events, the Hawaii Alumni Chapter provides alumni an opportunity to connect, engage and foster that same sense of community right here in Hawaii.”

So whether you’re in Seattle longing for your time on the islands or you’re in Hawaii missing Seattle, with Luau on April 28 and the newly formed Hawaii Alumni Chapter, there’s something for everyone.

Visit the Hawaii Chapter Facebook page to learn about how you can get involved in the Hawaii Alumni Chapter.

Posted by Seattle University Alumni Association on April 5, 2018 at 10:04 AM PDT

National Volunteer Month seems like the perfect opportunity to share that Jesuit Volunteer EnCorps is now accepting applications! JV EnCorps is a program of Jesuit Volunteer Corps (JVC) Northwest, facilitating meaningful opportunities for service, community and spiritual formation for adults 50 and older who are committed to social and ecological justice. JV EnCorps is available to individuals living in Seattle, Tacoma, Spokane and Vancouver Washington, as well as those in Portland and Bend Oregon.

During a ten month part-time volunteer service, participants meet regularly in their community to deepen their spirituality and explore the values of community, simple living and social and ecological justice.

Participants have found the program to be a meaningful spiritual and service opportunity.

“I like being a part of our JV EnCorps community because I journey with deep souls and gentle people who love and live in my hometown.” - JV EnCorps Volunteer

“This is my second year. I feel so comfortable and look forward to our monthly meetings. It is like going home each month to my like-minded, caring, giving corps members. I have grown so much in my understanding of our citizens who are just getting by. I am now respectful of everyone I meet and try to hear their concerns. The Jesuit way has become my life. I am intent on seeing God in everything.” - JV EnCorps Volunteer

"I’ve never done anything in my life where I felt more like I belonged than my volunteer work. They could do without me; I’m not sure I can do without them. I’ve been planted there for me, to gain something, to learn something." - JV EnCorps Volunteer