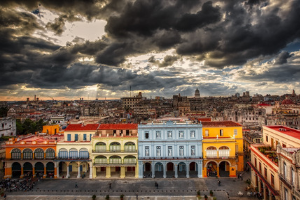 Cuban and Caribbean Studies for Intermediate/Advanced Spanish Speakers in Havana

The capital and largest city of the island nation of Cuba, Havana has a long and storied past. The city was chartered by King Phillip II of Spain in 1592, and was recognized by royal decree in 1634 as the “Key to the New World.” Due to its historic role as a trading port, Havana often fell prey to attacks by pirates and buccaneers, leading to the construction of a series of forts that can still be visited today – the most famous of these being “El Morro Fortress.”The city expanded greatly during the 17th century, growing to be the third largest city in the Americas by the middle of the 18th century; indeed, it was larger than Boston and New York at the time! The 19th century saw the construction of the railroad (the fifth in the world) and of various cultural arenas (theaters, lyceum, etc.) that hosted influential exhibits and performances throughout the 19th and 20th centuries. Today the city continues to promote the arts with numerous international arts and music festivals each year

If you haven’t joined the Education Abroad Canvas Course yet, Join Now!

The following are scholarships that are associated with this particular program. Scholarship application dates can vary, please check accordingly.