Seattle University students have a strong track record of achieving academic honors, including two Rhodes Scholars, considered the most prestigious academic award in the world.

Seattle U is a “Top Producer” of Fulbrights 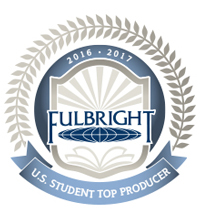 Seattle University was among master’s institutions to produce the most 2016-17 U.S. Fulbright students, with five students who were awarded the prestigious honor. Seattle U tied for sixth place with three other schools in the master’s institutions category. This is the fifth year in a row, and eighth time, Seattle U has ranked as a “Top Producer” of either student or faculty Fulbright awardees.

Eight students in as many years received the Harry S. Truman Scholarship, the most prestigious academic award for undergraduates preparing for careers in public service. Seattle University is among the most elite schools in the country for the number of Truman Scholars it produces, a total of 16 to date.

This prestigious multi-year funding program supports graduate-level researchers in the physical and social sciences. Nine Seattle University students have been selected in the past decade.

Seattle University continued its run of strong performances in the institutional Graduation Success Rate (GSR), according to 2019 data released by the NCAA. As a department, Athletics compiled a 94 percent GSR, while seven teams tallied perfect scores in the metric. The university has tallied at least a 93 percent in every report since 2008.

Thirteen SU programs tallied a perfect score of 1,000 for the 2017-18 report—up from nine programs with perfect scores for 2016-17—in the most recent Academic Progress Report (APR), released by the NCAA. Men’s cross country, swimming and tennis and women’s basketball, golf, softball, soccer, swimming, tennis, track and field and volleyball each recorded perfect marks.